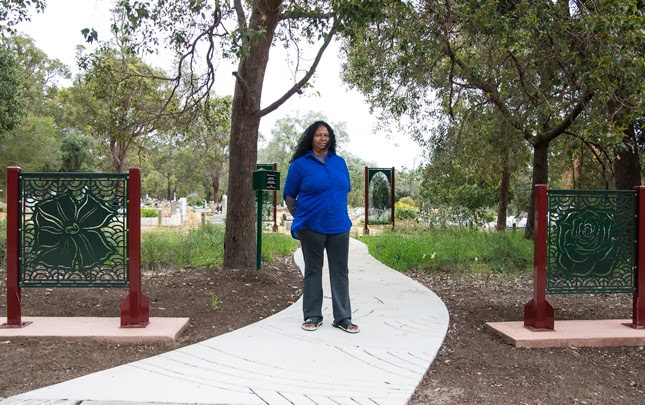 When entering the cemetery through the gate visitors view two smaller decorative panels marking the transition through an area of remnant bush land.  These panels give recognition to both indigenous and introduced flora, whilst two larger panels have been installed at the Cemetery Burial Plot end of the pathway, marking the introduction to the formal burial area.  These two larger panels have incorporated an angel motif and were specifically designed to reflect an image that transcended the confines of any one religion whilst embracing all faiths. 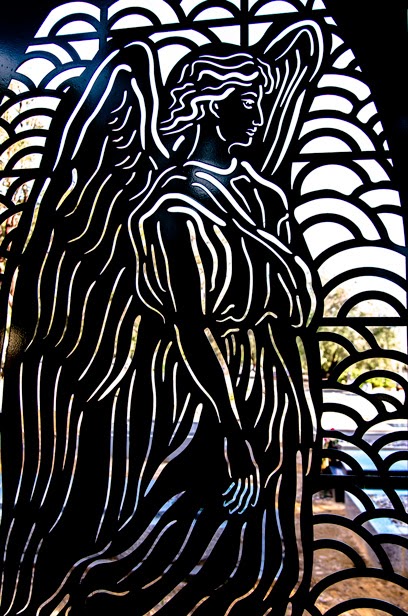 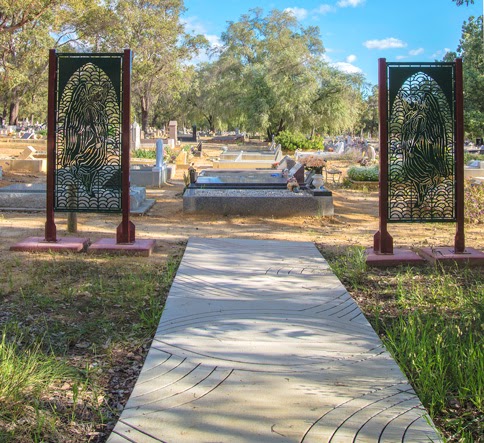 Serpentine has many unique stories that combine to make its character, these stories also express the history of the location and are reflective of the struggle of the early settlement of the state.  The surrounding district encompasses a large area of the original land holding allocated to Sir Thomas Peel.  The lead artists worked with members of the Serpentine Historical Society to uncover a wealth of old photographs.  Many of these images had been made available to the Society for use in the project and provided an exceptional visual record of historical and cultural value.  The diversity of content was quite overwhelming, unfortunately not all images could be included within the context of the community artworks produced during the project.  However, it is pleasing that a comprehensive selection of images were chosen and fixed to the ceramic tiles.  These images were translated into under-glaze using a highly specialised process and subsequently fired in a kiln to produce images of exceptional permanence.

A selection of 64 images were chosen for inclusion into the base area of the interpretive stands and these were fixed around the perimeter of the horizontal surface of the base areas. The interpretive plaque stands and accompanying photo tiles provide visitors and residents with a kaleidoscope of images, highlighting the many different people and activities of the Serpentine community and remain as an interesting and permanent display of cultural and historical information. 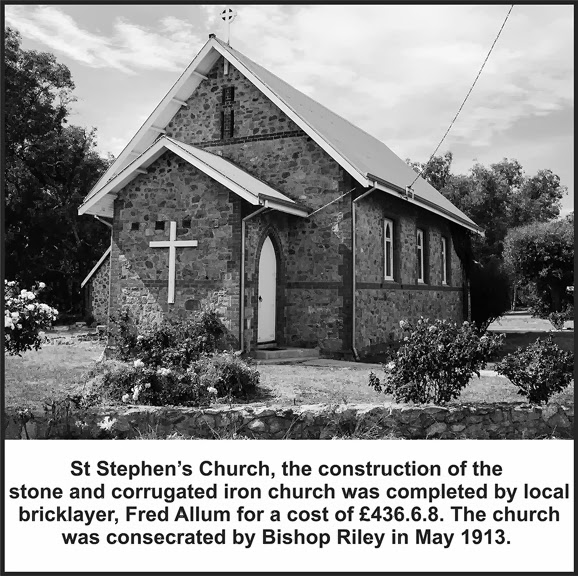 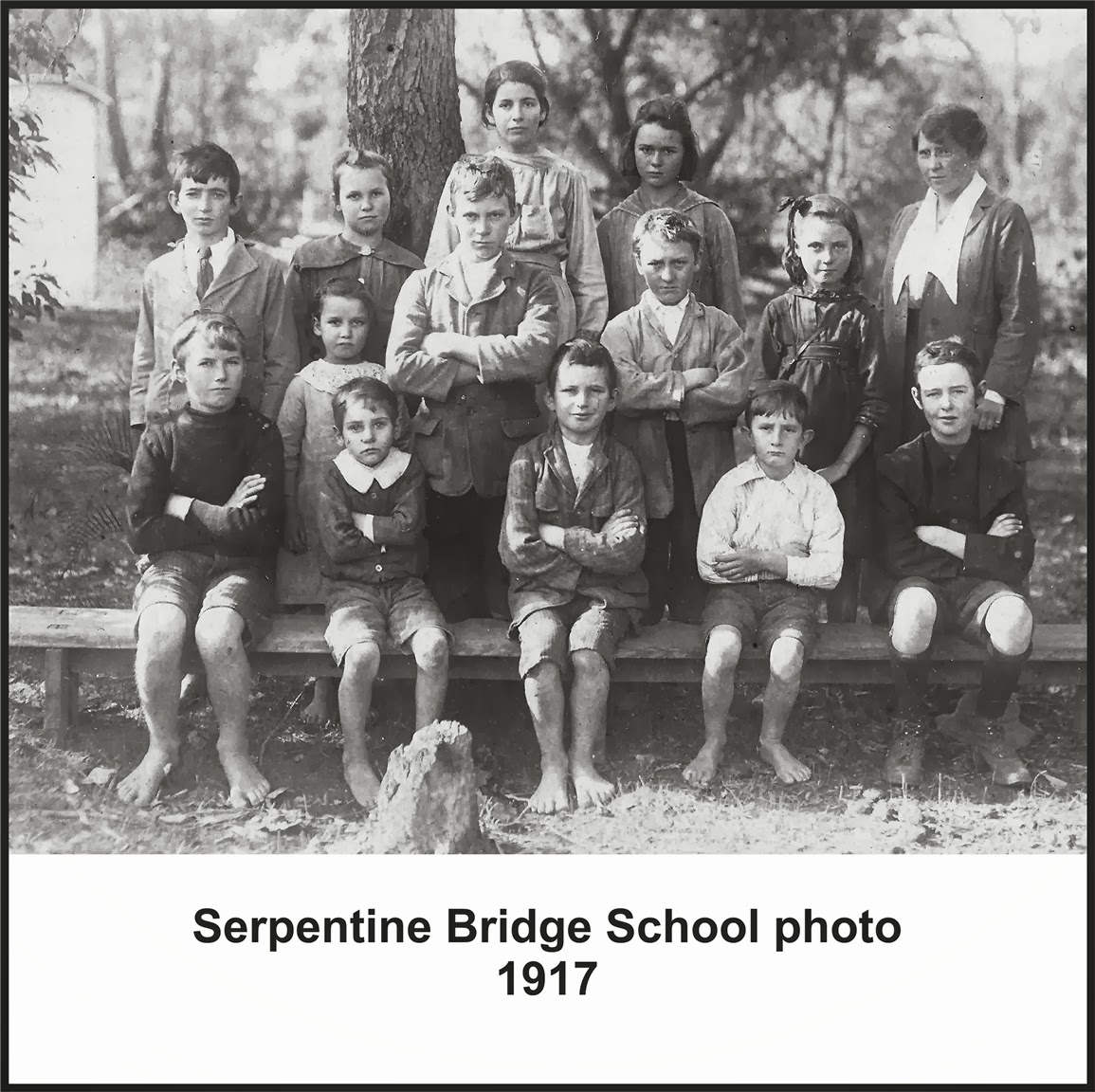 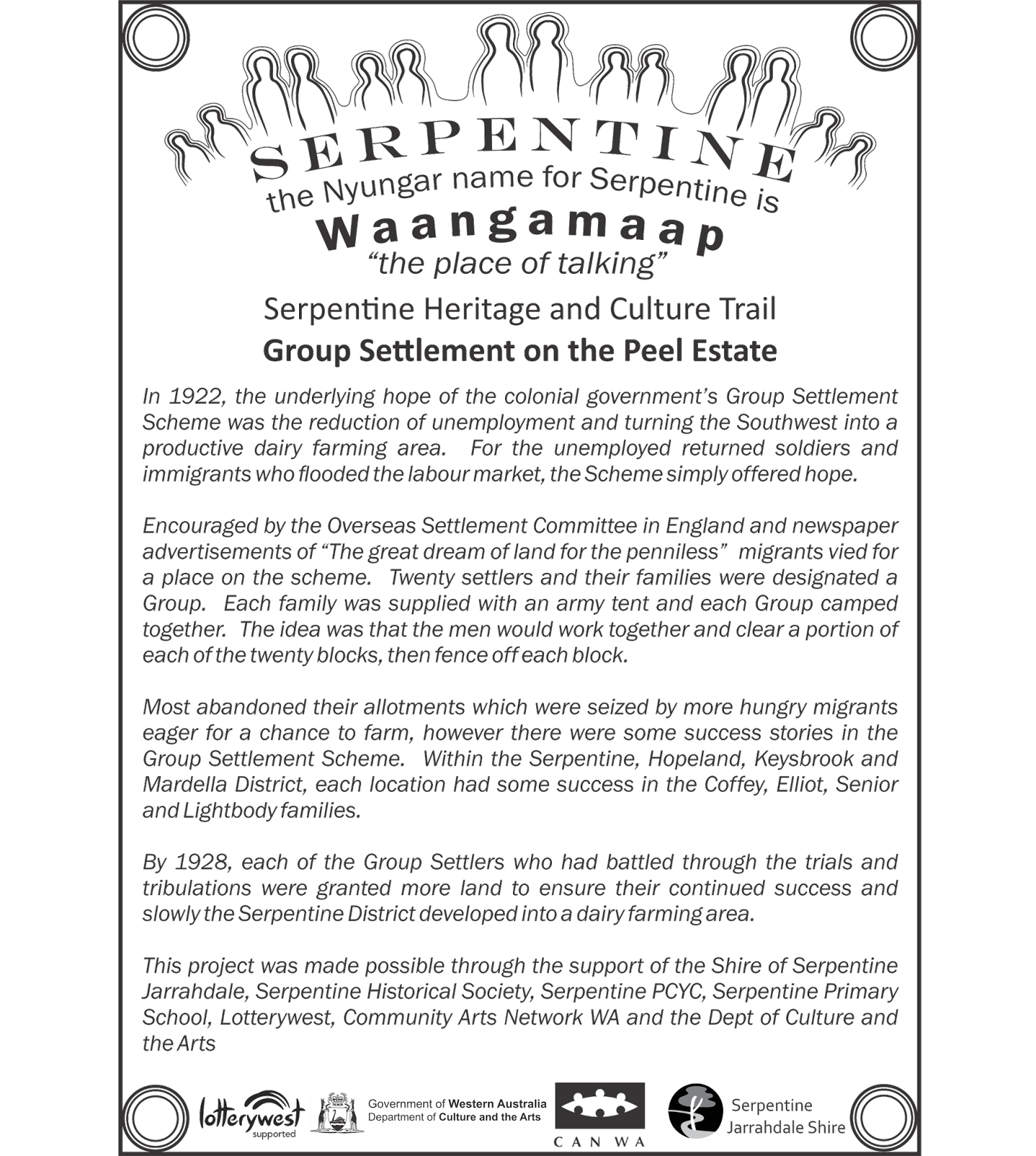 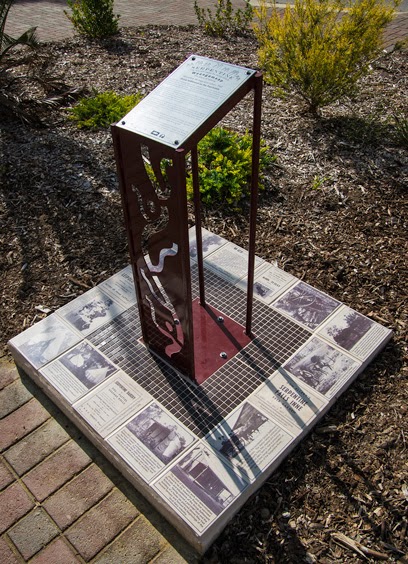 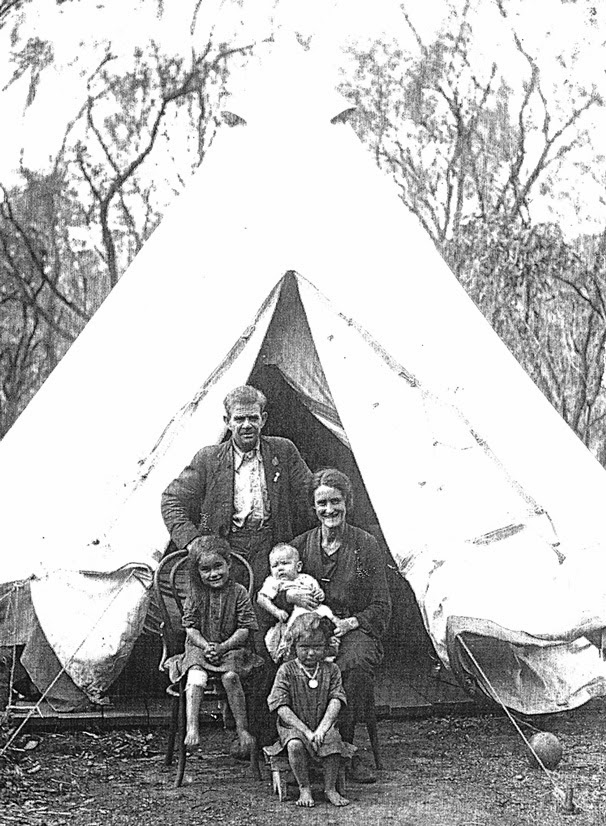 Photo of a family with their group settlement tent 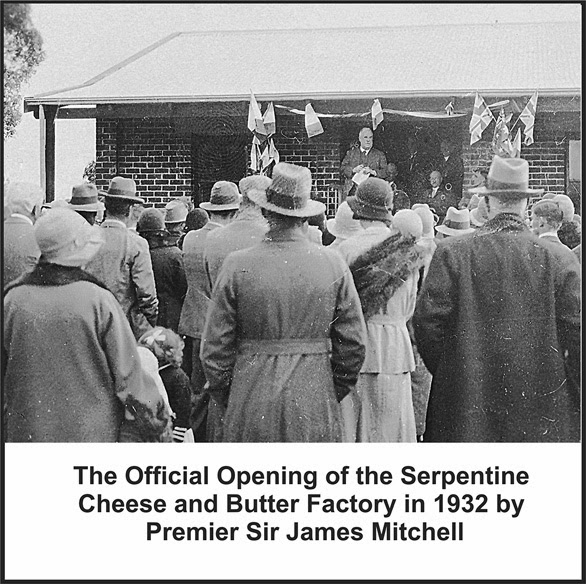 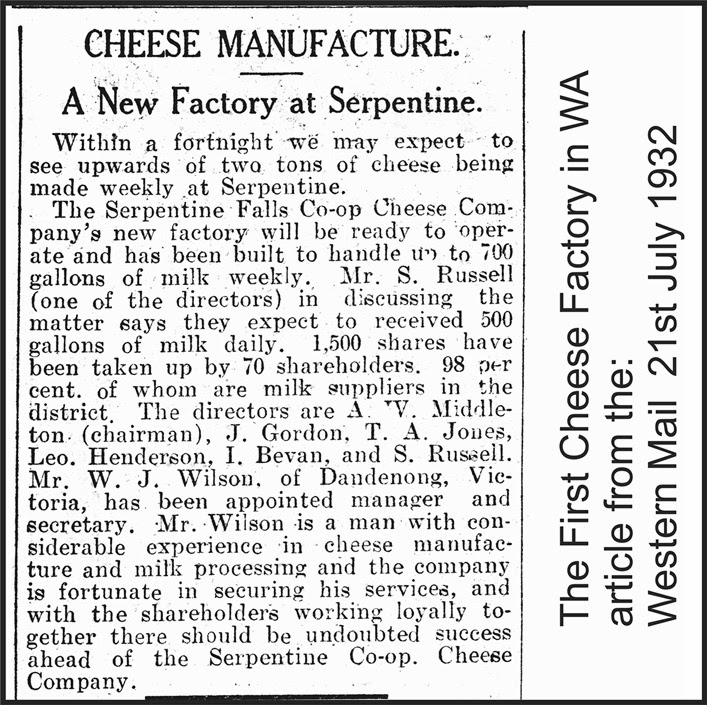 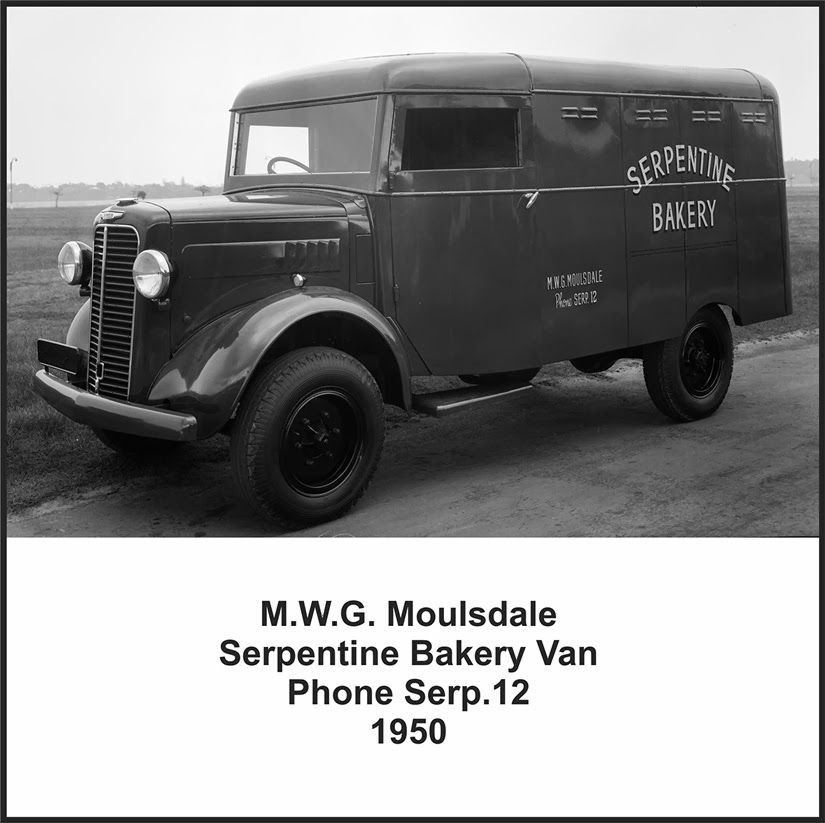 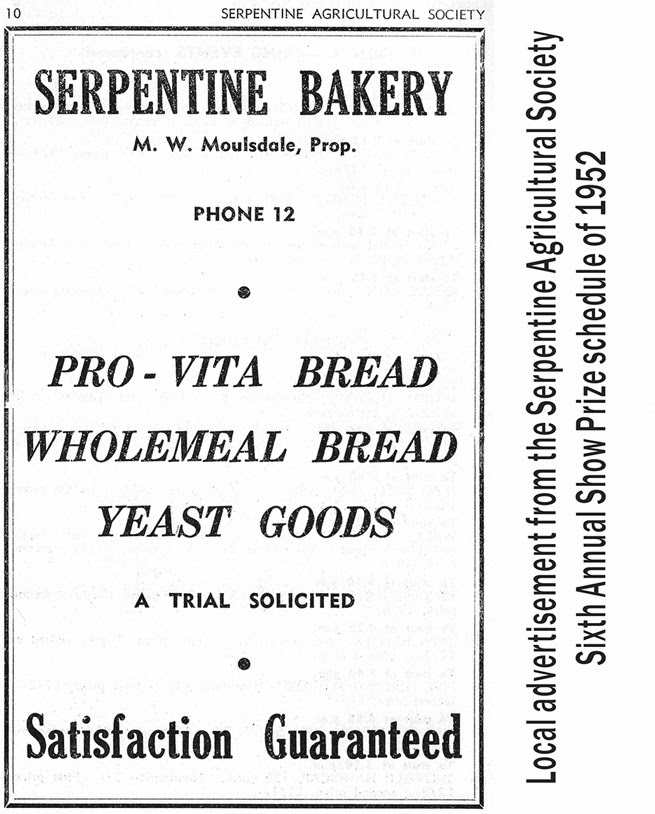 Posted by Robert Ewing at 5:27 PM No comments: 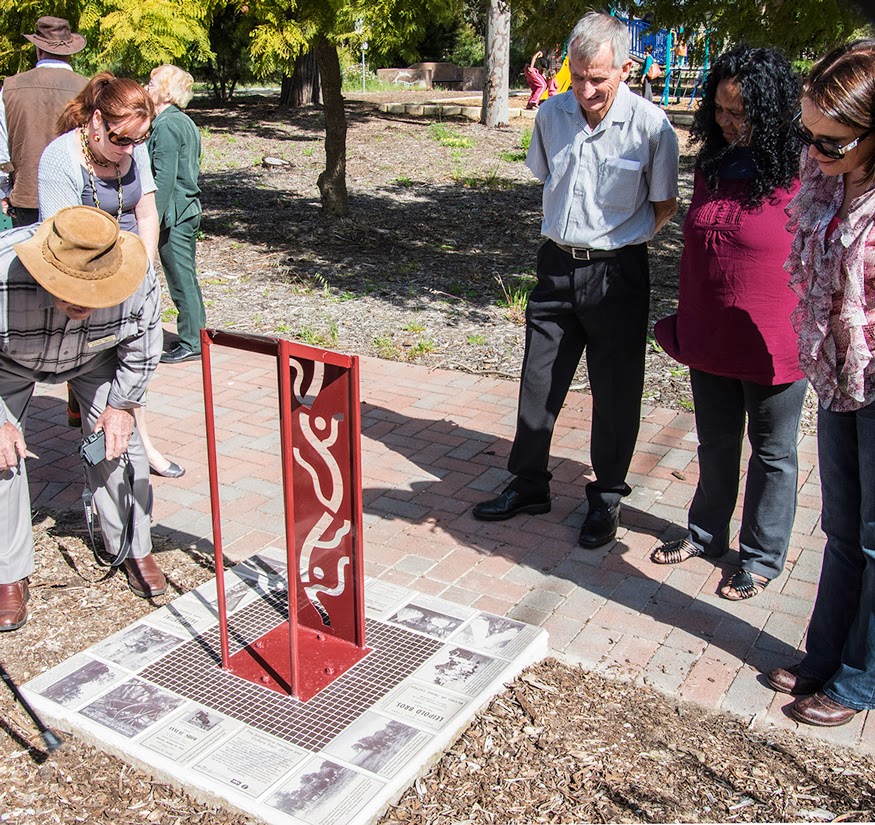 Community members viewing the one of the four interpretive plaque/artworks in Wellard Street, Serpentine

Serpentine Heritage and Culture Trail 2012 took place in the south west Australian rural town of Serpentine and began in 2008, when Mrs Myra Baldwin a member of the Serpentine Historical Society contacted me on recommendation of previous work I had been involved in.  During my initial meeting with Myra at the Serpentine Cemetery Myra informed me that the Historical Society had the desire to enhance the visitor appeal to the location and had sought my help to make it happen.  The Society had an idea to do something that was long lasting, engaging and decorative and there began a 5 year journey that encompassed considerable community consultation and aesthetic challenge, concluding in 2013 with the installation of artworks within the environs of the Serpentine Cemetery and main Street of the Serpentine Town - Wellard Street.

The project began as a visual arts based community project, consisting of various project partners including the Serpentine Jarrahdale Shire, Serpentine Primary School, Serpentine PCYC and the Serpentine Historical Society.  The primary focus of the project was to add some appeal to the Niche Wall of the Cemetery which had significant historical and cultural value to the local and wider community.

During 2012 and 2013 Gloria and I began the follow-on process of being lead artists and community facilitators in working with community members in the design and making of community artworks and interpretive plaques that sought to highlight heritage and culture values of the Serpentine community.  These artworks and interpretive plaques now form the foundation of the Serpentine Heritage and Culture Trail. 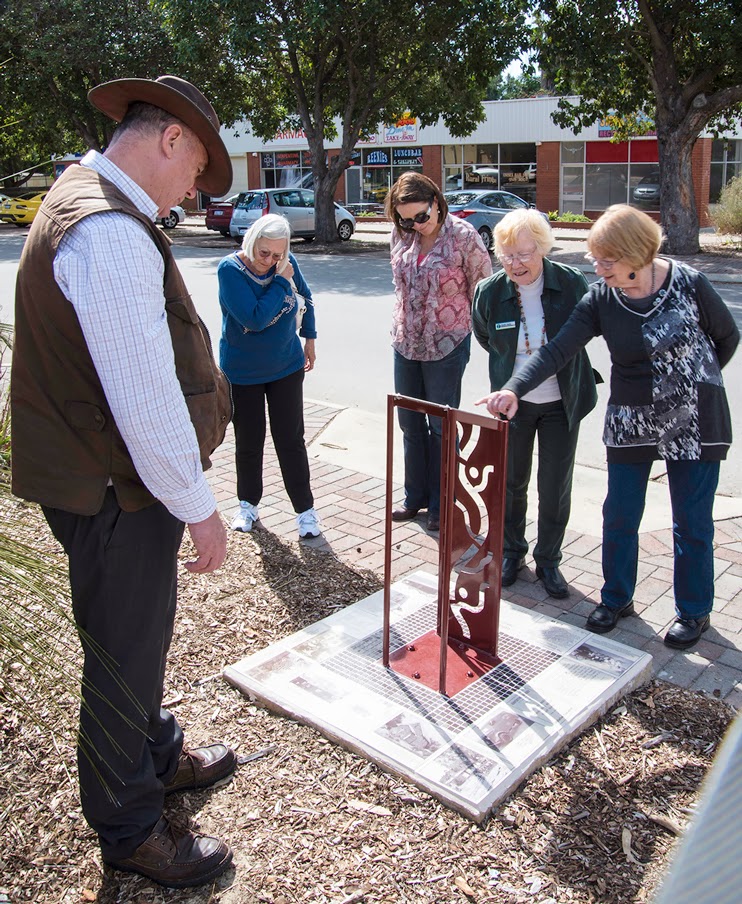 The notion of producing artworks within a cemetery not connected with any head stone or mausoleum is at odds with the sacred nature of the cemetery area and the act of imposing artworks within that space presented an inspiring challenge especially in terms of general aesthetic appeal and how one deals with unnecessary decoration or personal artistic expression.

The challenge required that a profound sense of humility and integration be employed by the artists in working with community members to develop, design and make the artworks for the cemetery.  It was not the place of the artists to impose an aesthetic upon the community, but rather to expose and refine the collective aesthetic that had developed from a grass roots level.  The final artworks were very successful in achieving the aim of “reflecting a sense of place”.
The Serpentine Cemetery is a designated bushland forever site 371 and has many old graves.  The artists worked with Historical Society and community members to design artworks that were reflective of the unique identity of the Cemetery.  The cemetery has 2 dedicated volunteers that have worked tirelessly to beautify the area; they also are members of the Cemetery Community Committee.  During the time of designing and developing the artworks, draft design presentations were made to the Cemetery Community Committee seeking feedback and endorsement.  All endorsed design proposals were then presented to the Serpentine Historical Society for final approval before commencement of art making. 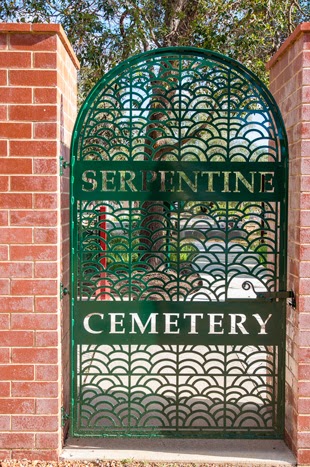 A decorative central gate for the Niche Wall was also designed and installed to complement the entry to the cemetery area.  The gate functions to provide an enhanced sense of ceremony and respect in entering the cemetery and is accompanied by four decorative panels that have been installed close to the start and finish of the new access pathway linking the Niche Wall area to the Cemetery Burial Plot area.

By facilitating a process of project engagement and research with community members, the artists were able to effectively work with community members in generating the content for artwork designs.  Initial designs were presented as drafts for further development and subsequently molded to ensure the resulting artworks reflected the sensitivities of the community and achieved a sense of respect for their intended location. 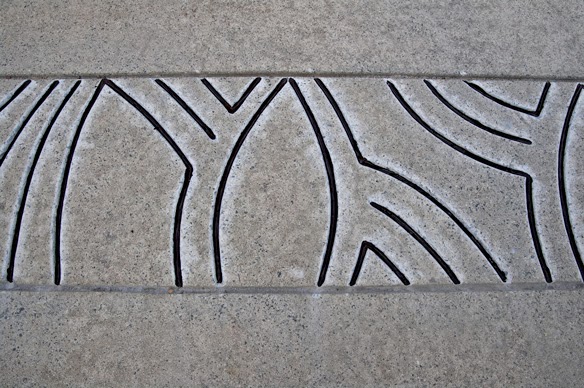 The project generated some interesting and challenging outcomes that were not initially expected.  One of the first challenges presented to the project was the need to clarify some of the spaces within the cemetery area.  These spaces included the course of pedestrian entry into the cemetery through the existing central gateway of the Niche Wall, then through an area of remnant vegetation and into the burial plot area.  The area that lay between the Niche Wall and the Burial Plot sections of the cemetery is predominantly natural bush/remnant vegetation and was being degraded by uncontrolled public access.  Numerous informal pathways had formed over time and these were endangering the integrity of the area.


The solution to the problem required that a permanent pathway be designed to link the two spaces and provide a formal access route through the area of remnant vegetation so that it could be successfully regenerated.  Before the laying of the pathway began, a plant count was required to identify and reduce the impact of the pathway upon the flora.  A design was developed that provided minimal impact to the existing flora whilst incorporating elements that were reflective of the location.  The final design for the pathway allowed it to meander through the vegetative area with a somewhat “Serpentine” quality, not unlike the flow of the nearby Serpentine River. 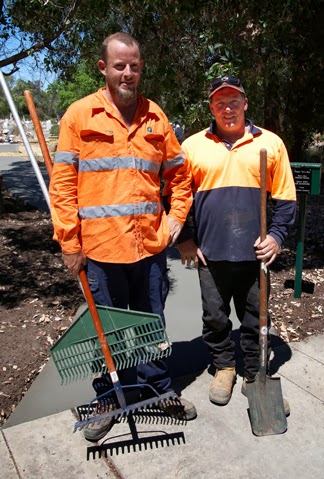 John and Dave from the Serpentine Jarrahdale Shire laid the pathway

The pathway once completed, presented another more aesthetic challenge in how its new concrete surface would visually impact with the existing aged concrete surface of the Niche Wall area.   The inspiration of local flora and fauna were considered in consultation with community members in an effort to identify appropriate reference material and content for the development of a design that could effectively be utilised to link these two surfaces together.

The surface of the pathway was subsequently embellished with a design inspired by the feathers of the Emu.  The final design was engraved into the new and existing concrete surface and successfully achieved its aim, whilst remaining subdued and non-obtrusive. 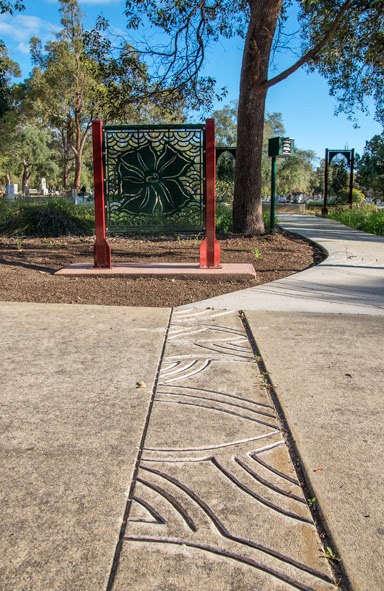 The Niche wall ends have been enhanced with the installation of 64 hand painted tiles by students of the Serpentine Primary School and community members.  The primary school students were buddied-up and shared a tile between two students and asked to express something about the cemetery, either the recognition of a family member/s buried within the cemetery or an aspect of the diversity of flora and fauna found within the cemetery environs.

The process provided some very interesting outcomes in the way the students dealt with the challenge of collaboration with one another and how their images could be translated within the constraints of the tile area.  Some students chose to delineate the tile area into clear sections whilst others unified their images into a cohesive design that allowed each student’s input to be recognised and expressed in a highly imaginative manner.  All the hand painted tiles produced by the students were very successful. 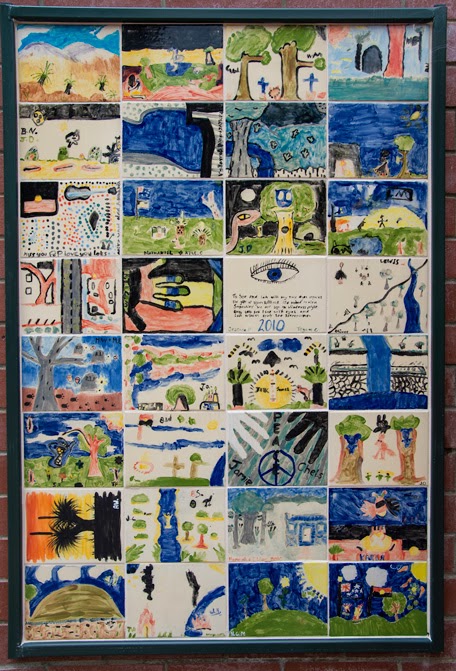 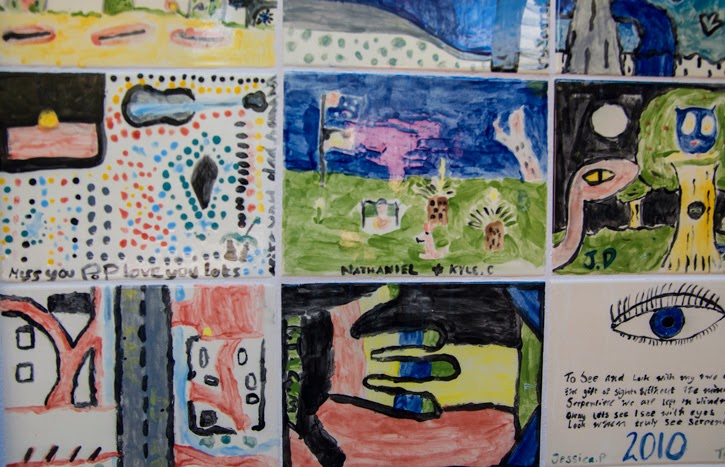 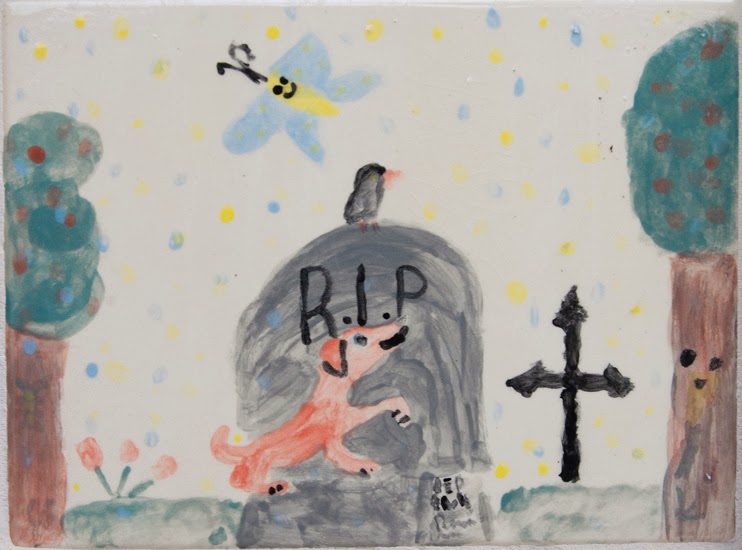 Posted by Robert Ewing at 4:46 PM No comments:

Robert Ewing
Nth Pinjarra, Western Australia, Australia
I'm a visual artist with over 25 years experience in cross cultural collaborative projects. Many projects have been community arts based and have sought to facilitate broad community engagement in all aspects of project design, development and management. I often collaborate with Nyungar artists here in the Peel region of Western Australia. Clients include government, community organisations and the corporate sector. I also produce fine artworks on paper. You can check out the artwork here: www.ewingarts.com.au